Preview: The Witches of the Sphinx Vol.2 – The Waterpipe from the Bazaar

Posted on August 9, 2010 by dankanemitsu 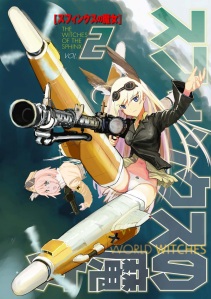 The Witches of the Sphinx Vol.2 – The Waterpipe from the Bazaar is going to be ready for sale on Sunday at the Comic Market!

I’ve finally found some time to prepare a simple preview of the latest Strike Witches doujinshi I participated on. The Witches of the Sphinx story line is part of the North African Front campaign being waged in the Strike Witches world. 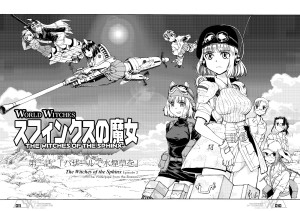 The broad direction of the project is supervised by Takaaki Suzuki, the script writer and military/world construct advisor. He’s the person that makes sure the world of Strike Witches remains consistent. Strike Witches concept was created by Humikane Shimada. 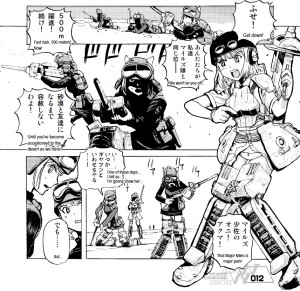 The manga is authored Takeshi Nogami. Nogami has worked on numerous projects together with Suzuki and Nogami wanted to help realize Suzuki and Shimada’s conceptualization of the North African Front.

I’ve also tried to do my part by contributing some reference material to the production. I translated the entire project, manga and short story and all.

Last episode showed how humanity’s forces were starting to come together to try to push back the Neuroi threat. In this episode, you find out that the Neuroi pushed through the Middle East and overran Britannia forces in the Suez.

Local Egyptian forces suffered tremendously and resentment between Europeans powers and the locals have left their mark, but the witches will stop at nothing to try to alleviate the situation. 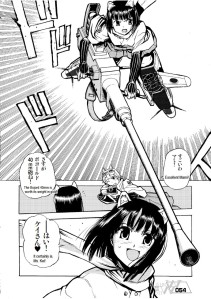 The key word for the manga this is is, “Never mess with a girl’s shopping!”

Suzuki also authored a short story for this volume. In A Midnight Night Dream in the Desert, you’ll find out more details about the epic battle that took place prior to the current Neuroi onslaught. The Battle of Fusō Sea has been hinted at for some time in the Strike Witches Universes, but Keiko Katō finally reveals what happened.

Kei, the current commander of the Joint Fighter Squadron Afrika, was a combatant in the battle that took place from 1937 to 1938. She was a member of the Three Birds of Fusō Sea, a celebrated trio of the Imperial Fusō Army Air Services Witches Force that helped keep Neuroi at bay.

If you want to find out more about Takeko Katō, Tomoko Anabuki and Keiko Katō, you’ll have to get yourself a copy to read this short story.

“When I opened these eyes of mine once more, I found myself resting upon a comfortable summer mattress covered in bright white silk. Thus, having escaped the maw of death, I find myself wrapped in thin silk gauze. And so, my days of armed contest, filled with much gallantry and glory, had come to an end.”
Mami’s voice recedes into the darkness.
For a moment, the air is silent, but a moment later a thunderous applause is directed at her.
Having completed reading her book, Mami’s face expresses absolute bliss. She had her eyes closed and her hands clasped against her chest, but then the boisterous applause snaps her out of it and she takes a deep bow.
“I liked that tale,” says Marseille as she lifts her glass and directs a nasty smile at me.
I fill her glass with whatever that was inside the bottle that was nearest to me, beaming the best expression of contempt and scorn I could muster. I seriously ponder pouring milk into that glass of hers.
Knowing Marseille, she’ll mistake it as whiskey punch and enjoy it. I shouldn’t bother.
Mami just completed reading out loud a book I tried my best to banish to the deepest recesses of my mind. I came, I flew, I fell written by me, yours truly. Marseille ordered Mami to translate the book into Karslandish. And then, has Mami read it to everyone. What kind of torture is this?
That paymaster lieutenant who brought this book here from Fusō is going to regret being born after I’m done with him.
But once Marseille has her heart set on something, there’s no way anyone can stop her. Even if General Rommel issued an order, or even if the Karlsland Emperor Frederick IV issued an imperial decree, Marseille couldn’t be swayed from her course of action.
So that just means it would be better if I sit here and take the punishment. This is great amusement for the soldiers who have so little to do in the desert. Even small gags like this can raise the morale of the troops. Especially when the butt of said joke is their superior officer.
Now it’s one thing for Marseille and Raisa and the maintenance troops to be enjoying this…
“But what on earth are YOU people doing here!?” I yell out loud at the other senior officers sitting at my table. Officers that rank above me. Werner and other high level officers the Britannia 7th Armored Division, and Herr General Rommel, the supreme commander of Karlsland Afrika Korps himself, are sharing drinks at this table.

The Nine-Sevens.
Project designation, Ki-27. The Nagashima Type 97 Fighting Limbs.
Equipped with the Nagashima Ma-1-Otsu (II) magic engine, its top speed was 460 km/h, or 285.8 mph. It was 60 km/h faster than the previous Nine-Fives or the Kawataki Type 95 Fighting Limbs, thanks in part to numerous refinements.
I have very fond memories of the Nine-Sevens.
It was light, could turn on a dime, and was both sturdy and easy to handle. The Type 97’s shortcomings were its somewhat limited range and the way you couldn’t get much of a boost to its defensive shield even if you tweaked the power distribution settings.
But we grew accustomed to the Nine-Sevens right away and we were able to fight even more effectively as a team than ever.
We’d launch together and we’d return to base together. At times, we’d take to the air together with our Navy friends, but they’d be jealous over how our rate of climb and acceleration was better than theirs. It’s strange, because our top speed was the same, but perhaps it had something to do with how the Ma-1-Otsu had more power.
As we kept on fighting like that, someone came up with name “The Three Birds of Fusō Sea”. I understand some newspaper was the first to coin that phrase, but other units also started getting nicknames, like the “Eagle of the Fusō Sea”, “Raging Tiger of Fusō Sea”, “Fusō Sea Lightning”, “Samurai of the Gale Winds” and “One-Eyed Dragon.”
Even back then, Tomoko would be placed in the middle when we had our photos taken together. With her long black hair and doll-like features, Tomoko was considered the most photogenic among the three of us. She had such a slender physique, and there’s no doubt that she looked stunning, standing there with her favorite Fusō katana.
I, on the other hand, was the exact opposite…

While its hard to get any translation perfect, I’ve tried my best to work on this project with quality in mind. I had a fellow translator David Fleming help out with proofing, so it should be even better than before. I tried my best to try to replicate the tone Suzuki infused with the story, so there will be parts were the terms might be different from what you’re used to, but I’ve checked with Suzuki regarding this. My goal was making his brainchild as authentic in English as much as possible.

Overseas sales of this volume is currently being worked out. I’ll make sure to let you know when more details are finalized. In the meantime, keep alert of recent updates over this project here and at Nogami’s website and blog.

The book will be on offer at the summer Comic Market on Aug.15th taking place this weekend. Nogami’s doujinshi booth will be setup at M-24a/b in the East Hall. The booth names are Firstspear and Unidoraku. M-24 is located roughly right between East 1 and East 2, near the interior pillar, so it should be easy to find. Nogami himself will be there!

This entry was posted in doujinshi, translation and intercultural issues. Bookmark the permalink.

3 Responses to Preview: The Witches of the Sphinx Vol.2 – The Waterpipe from the Bazaar

While I may not be able to respond to all comments, I always welcome feedback. Thank you. Cancel reply